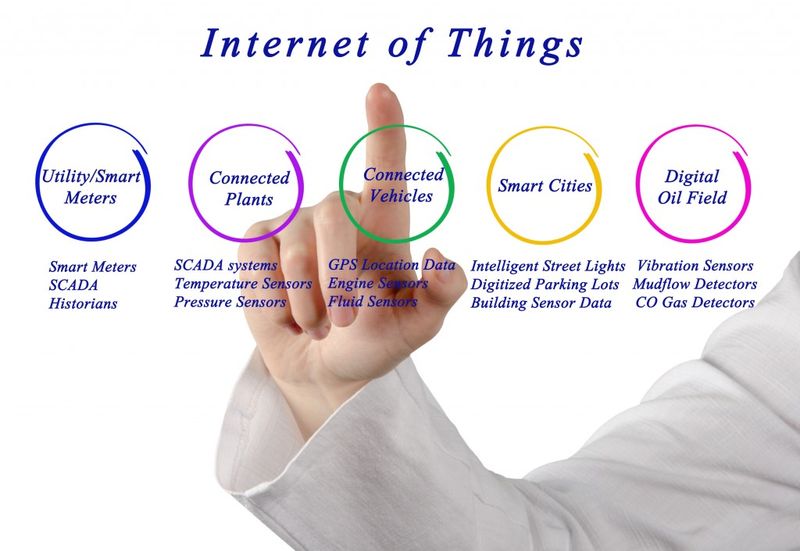 Cisco’s acquisition of Jasper overnight has set the Internet of Things world buzzing even more, if that were possible. Everybody’s talking about the IoT, and it’s not hard to see why: who wouldn’t be drawn to the possibilities of smart cities, connected cars, or wearable health sensors, to name just some of the potential use cases?

From what we’re seeing at Asavie, the conversations – not to mention the hype – have mostly focused on the devices gathering the data, the servers crunching it and the apps and analytics that could result.

That leaves a huge gap in the middle, though, and it’s the glue that binds the bigger IoT story together: connectivity. Cisco’s announcement of intent has drawn attention to this important aspect of IoT. Things were simpler in the days of machine-to-machine (M2M) communication, which as Dr Laurent Guiraud of CSC outlines in his recent blog post, was the forerunner of what we now think of as IoT. Back then, when industrial control and monitoring systems were starting to become automated, their communication was via closed channels on the user organization’s own network.

IoT, on the other hand, is designed to be open – all the better to be able to take massive amounts of data from large numbers of sensors, and aggregate it to get really powerful insights and outcomes.

By its nature, IoT stands on the shoulders of M2M, but it’s a lot more complex in nature. So what does a typical IoT ecosystem look like? We’ve found it helps to visualise it as four quadrants of a circle. Starting at the bottom right, we have the collection of information from sensors and devices. Let’s go anti-clockwise to the collate part, which is where all of this data gets analysed. Next, in the top left quadrant, we have the control element – the platform that gives the IoT project sponsor the ability to manage the data, devices and the network. This is where Cisco eyes the value in their acquisition of Jasper. Jasper provides a software platform that manages the SIMs embedded in the IoT devices. 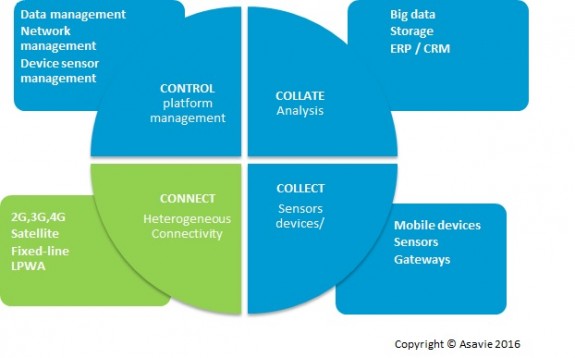 Finally, we get to the connectivity. Cracking this challenge with the Internet of Things is actually a surprisingly difficult problem, and something that Asavie was founded to address. There are lots of different ways of connecting sensors and devices back to where their data will be stored and analysed. There are strong discussions in the IoT world about alternatives to cellular, and LPWA networks are a good alternative in some scenarios. In an industrial setting, depending on where the sensors will be deployed, you could be looking at a wide range of possible networks, from 2G, 3G and 4G, to LPWA networks (LoRa, Sigfox etc.), satellite and possibly even fixed-line connections.

There’s a lot of prototyping and early-stage ideas happening in IoT, and that activity has been christened ‘the maker community’, covering anything from a hobbyist to a start-up to project teams inside some of the world’s biggest names.

As things stand today, if a maker talks to a carrier about getting connectivity for an IoT project, they’ll be given a SIM card which is not dissimilar to the one you get in a smartphone. That SIM might be perfectly good for use in an iPhone but that doesn’t necessarily mean it’s suitable to be deployed in a moving delivery truck that has to talk to the warehouse. Jasper plays in this space

There are a whole host of issues that need to be resolved with this model, including security concerns and billing concerns.

From traffic signs or baby monitors that are on the internet if you know where to look, there’s plenty of ammunition out there for people who have used inappropriate connectivity for their IoT applications and gotten burned.

Take a look at Shodan, the search engine for the IoT, and you’ll find vulnerable devices all over the internet. Let’s say there’s a four-year-old programmable logic controller that you want to gather data from, but it’s got a vulnerability. Not only is that a security issue, you’ve also got a billing headache, since pushing even a very minor patch out to that device over the carrier network can cost a lot of money.

So, the challenge for a maker is not only to enable connectivity between devices, but also to aggregate your network in a way that makes it straightforward to manage. It also has to be done securely. It’s increasingly necessary to treat IoT devices as their own DMZ, to segment them into their own network, where you as the maker are in control of access and egress. Use IP by all means, but don’t expose your devices to the public internet.

Because IoT is a relatively new and fast-moving space, early projects have kept things simple by using networks that were available and accessible rather than what was fit for purpose.

But why compromise? A lot of people in the industry believe private cellular networks can’t be done – but they can. There are connectivity platforms for M2M communications that also enable intelligent insights to be exposed – enabling enterprises or makers to build valuable IoT deployments. So it’s no longer an either/or decision about whether to connect sensors to the internet or not to have IoT.

Makers don’t need to pass up on cost savings or Big Data-driven insight because they’re concerned they can’t secure the network. With all SIM cards for all devices on a dedicated cellular network with static IP addresses, now the IoT community can really think big.

Posted at 9:09 am in Industrial Internet Consortium,Technology,Web/Tech, | Permalink