Augmented Reality and the Edge 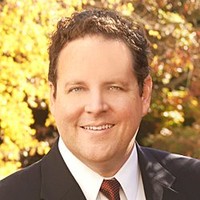 There are three types of displays that can support AR. Typically, AR is displayed through a special headset; however, AR can also be done with smartphones where the smartphone screen is used as a window on the world with AR. This form of AR is neither heads-up nor hands-free, but the user does not need to wear or buy a special headset. Spatial AR is a third form of AR that does not require a headset or a smartphone. Instead, light is projected onto physical reality.

A simple use case is to project a red dot on to an assembly in a workspace to draw a worker’s attention. Spatial AR could include holograms too. While wearable and totable computers are not required with spatial AR, projectors must be built into physical reality and thus spatial AR is not mobile. These three forms of AR are shown in Figure 1, “An Intelligent Reality System for Proximate Workers and Remote Experts.” Headsets are wearables. Totables include smartphones and tablets. Ambient computing can drive spatial AR. AR applications of any type can access both edge services as well as cloud services. 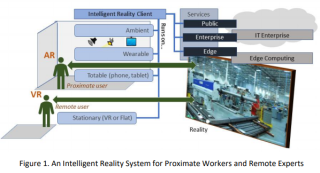 As is usually the case, the expected use cases should drive the architecture of AR at the edge. With specific goals in mind, architects should ask:

AR can provide an active Human Machine Interface (HMI) connecting user and the IIoT Services. For example, for remote coaching in maintenance, an experienced master can pinpoint the spot instantly. These experiences can be further enhanced if edge intelligence is also added in a real-time or near real-time basis.

Posted at 6:31 pm in Uncategorized, | Permalink